← What are Performance Analysis and Match Analysis?
England League 2: How important is the first goal? →

Nowadays, many coaches start using notational analysis by pen and paper to help their coaching. For example, they count the number of passes, shots and crosses etc to see how the team performed and which area can be improved. Apart from notational analysis, the coaches can improve their coaching by knowing more about motion analysis in football as well. In my previous article (here), I discussed about what motion analysis is. In short, motion analysis is the process of classifying activities according to intensity of movements (Strudwick and Reilly 2001). The three elements that should be considered are intensity (or quality), duration (or distance) and frequency (Carling et al 2005). The activities were coded according to intensity of movement, e.g. walking, jogging, cruising and sprinting. By using the information, the coaches can design specific drills to fit the football players in different levels and positions in order to achieve higher efficiency of improving performance.

One of the early researches about motion analysis in football was from Reilly and Thomas (1976). They found that the overall distance covered by outfield player during a match consists of 24% walking, 36% jogging, 20% cruising, 11% sprinting, 7% moving backwards and 2% moving in possession of the ball. The below figure visualises the above finding. 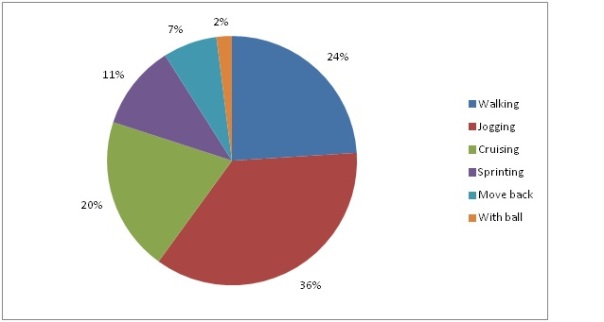 They found two things about the ratio of low-high intensity exercise. The ratio is 2.2 to 1 in terms of distance covered and 7 to 1 in terms of time. Different researchers have different activity profiles. For example, Bradley et al (2009) classified players’ activities into standing, walking, jogging, running, high-speed running and sprinting. Generally, the activities would be classified into two categories: low to moderate intensity activity and high intensity activity and different researches had similar results. Bradley et al (2009) found that low-intensity activity represented 85.4% of total time. Bloomfield et al (2007) had a similar finding that 80-90% of performance is spent in low to moderate intensity activity whereas the remaining 10-20% are high intensity activities. From the above figure, you may realize that only 2% of the total distance covered by top players is with the ball, that means vast majority of actions are “off the ball”, for instance, running into space, support teammates, tracking opposing players. If you are a coach, try to ask yourself “Should I put more effort and time coaching players without the ball rather than just coaching the player with the ball?”. Some other findings such as player has a short rest pause of only 3s every 2 minutes and players generally have to run with effort (cruise or sprint) every 30s (Reilly and Williams 2003) may be useful for the coaches as well.

For the mean distance covered, Strudwick and Reilly (2001) stated that the top division players in the 1970s covered a mean distance of 8680m. In contemporary premier league the figure became 11264m. They suggested that it was because there are more passes, runs with the ball, dribbles and crosses which lead to the increase in the tempo of games. In the research of Bradley et al (2009), the result is 10714m. If you are a coach of adult’s team, the information can be a benchmark for your reference about distance covered for your players.

Does work rate and movement vary by the different positional roles?

Some coaches may realize there should be some differences but they may not realize what the differences are. There are positional differences in work rate and fitness levels. In terms of distance covered, midfield players have the greatest distance covered which is reasonable because they acts as links between defence and attack (Reilly and Thomas 1976)(Ekblom 1986)(Bangsbo et al 1991). This finding was supported by other research. For example, midfielders were engaged in a significantly less amount of time standing still and shuffling and the most time running and sprinting (Bloomfield et al 2007). Greatest distance covered sprinting were found in strikers and midfield players (Reilly and Williams 2003). In terms of the difference between full backs and centre backs, full backs covered more overall distance than the centre backs, but less distance sprinting (Strudwick and Reilly 2001)(Reilly and Williams 2003).

Apart from work rate, motion analysis analyse movement as well. There are different movement characteristics for different positions. Here is the list of findings from different researchers.

I hope these are useful for the coaches to know more about different requirements in different positions in terms of work rate, movement and even body strength.

Does work rate vary by the styles of play?

Although all the work rate research done by different researchers are facts, we should think about whether it is ‘all of the facts’. Are they always 100% right and can be applied to all situations? I think style of play is a factor which can affect the work rate of a team. Some researchers had the same view also (Bradley et al 2009)(Reilly and Williams 2003). In possession play, the pace of the game is slowed down, the attacking moves are delayed and the players will wait until opportunities rises. In direct play, the team tries to raise the pace of the game by passing the ball quickly in order to transfer the ball quickly from defence to attack to create opportunities. Therefore, the team would prefer long passes rather than a sequence of short passes. Apart from possession play and direct play which are the most discussed styles of play, we shouldn’t ignore Total football and South American style. I don’t know much about these two styles but I think the work rate requirement of Total football would be similar to direct play as they exchanges positions frequently. South American style is more rhythmic and the overall distance covered is 1.5km less than in the English Premier League (Rienze et al 2000).

In the 90-minute match time, 80-90% of performance is spent in low to moderate intensity activity whereas the remaining 10-20% are high intensity activities. However, we must remember that most of the key incidents of the game are happened within those 10-20% high intensity activities. There are significant differences existing between strikers, midfield players and defenders in terms of work rate, activity profiles and movements. For example, defenders have the most of backwards and lateral movements. Midfielders covered the greatest distance. Strikers/ forwards tend to receive the ball when sprinting. I hope this article would be useful for the coaches to know more about different requirements of different positions in order to design more specific conditioning programs for the players. Defenders and strikers need speed and agility type drills while midfielders need interval running over longer distances.

← What are Performance Analysis and Match Analysis?
England League 2: How important is the first goal? →