Football Basics – Factors to be considered in attacking by crossing

In my opinion, there are 5 factors to be considered in attacking by crossing:

Space has two different meanings in this factor. Firstly, it means the space in the prime target area. As I mentioned last week, the crosses hitting to the back of the defence is the best option because it is difficult for the defenders to clear. Therefore, if there is space in the prime target area, the ball should be crossed into that space as soon as possible. Secondly, the second meaning is about the space available on the flank for the winger to make a cross. In other words, it is hard for the winger to cross the ball if he is tightly marked and he has no space at all.

2. The position of the defending players

In this factor, there are 3 types of defenders to be considered:

In the above figure, the ball is in the wide area (red) so the goalkeeper (blue) stands near to the near post.

In the above figure, the ball (red) is in a deeper area so the goalkeeper stands further from the near post and goal line.

3. The position of the attacking players

4. Technique for crossing the ball

The best technique in crossing the ball is a swerve kick with the inside of the foot because of two reasons:

5. How to attack the crossed ball

In this factor, there are 3 things to be considered:

Why crosses are essential?

When a team attacks in the attacking third, there are two ways to attack generally: central attacks and flank attacks. Due to the importance of zone 14, the majority of the defenders would concentrate on defending the central area. The defenders’ aim is to deflect attack toward the flanks which is away from the danger area (zone 14). As a result, a good attacking team should be able to attack effectively down the flanks. The two flanks are the areas where a team can expect to find most space in the attacking third of the field. 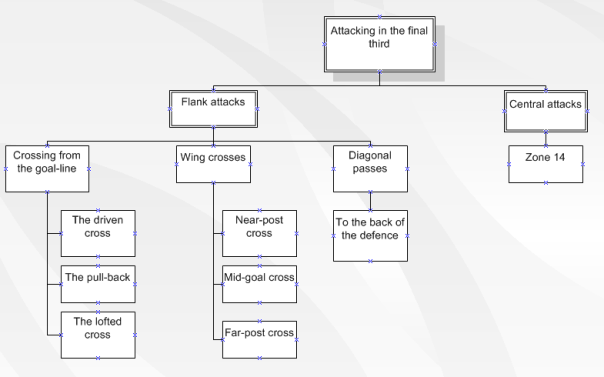 Figure 1. Organisation chart showing the options of attacking in the final third

What is the prime target area? 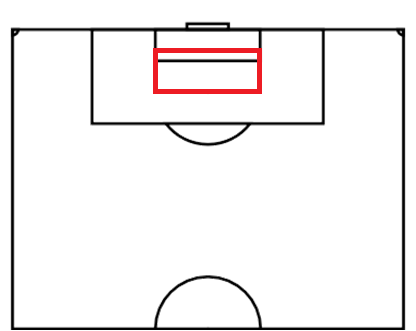 Figure 2. The prime target area (red) in the penalty box

Where to release the ball?

There are three different positions to release the ball in crossing: goal-line, wide area and deep area.

This area is just inside or outside the penalty area near the goal line. As mentioned before, it is difficult for the winger to get into this area unless he can beat the defenders by dribbling or by pace. Moreover, it is rarely possible for the winger to play the ball to the back of the defense because the defenders will position themselves in and around the 6-yard box 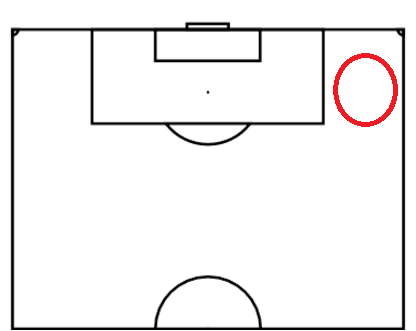 This area is within a few yards of the touch line and next to the penalty box. Usually the winger makes cross on the run without halting his stride. 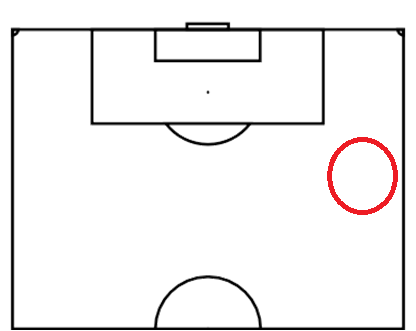 This area is just inside the attacking third of the field. Therefore, it is more suitable for the full backs to cross the ball.

The organisation chart in figure 1 is a guideline for the topics I am going to cover in the following few weeks. Since zone 14 was discussed before, I will focus on three types of flank attacks.

The concept of passing check list was suggested by Charles Hughes in the book “The Winning Formula”. Before explaining the check list, it is worthy to understand more about his philosophy of how to play football.

Football is a space invasion game. If the team can’t bring the ball forward to invade the space in opponent’s half or defending third, they can’t score. Therefore, his philosophy is that the player should always try to play the ball forward whenever possible. He thought attitude (positive or negative) is the key difference between success and failure. Forward passing is only one of the ways to achieve this goal. For instance, the player can make a shot, dribble or run with the ball to play the ball forward also. He argued direct play embodies a positive attitude and possession play (movements with high numbers of consecutive passes) embodies a negative attitude. The following table briefly summarises his thought in comparing direct play with possession play:

As a result, he made a passing check list to explain his philosophy and give a guideline to players how to play forward whenever possible. The check list is in order of priority from an attacker’s point of view.

1. A pass into space behind the defence:

This type of pass is in the top of the priority list because it can cause the defenders more problems. After the pass, the defenders are not facing the ball anymore, they have to turn around and run towards their goal. There are three ways to execute this type of passing.

1.1   between the centre back and the full back – straight pass 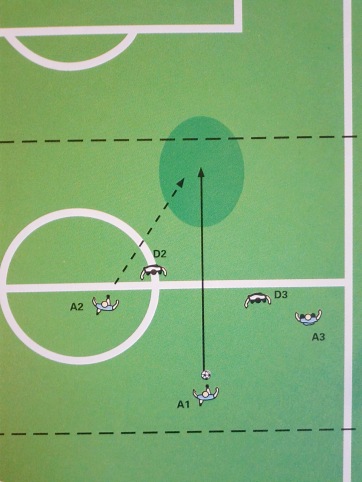 1.2   between the centre back and the full back – diagonal pass

1.3   diagonal pass over the head of defenders

2. Passing to feet of the most advanced attacker

3. Other forward pass (beyond at least one defender)

If the attack is on one side and there are too many players congested in a tight area, it means there will be space on the other side. The attackers should be ready to exploit it.

5. Passing back – the last resort (to supporting player)

The supporting player should have the time, space and field of vision to play the ball forward

I agree with the theory about the passing check list but I don’t totally agree with his thoughts about direct play and possession play. I don’t think possession play is playing to avoid defeat. Instead, possession play can be used with positive attitude to penetrate the defence of opponent. Possession play can be interpreted as looking for the best chance to attack and they will attack it directly when the opportunity comes. However, some teams do pass the ball around for the sake of keeping the ball but not creating shots. It all depends on the interpretation of the team. A good example is the comparison of Barcelona and Swansea which was claimed to be British football’s Barcelona. Both teams are possession based but the key difference is the penetration in/ into the attacking third. Barcelona is using possession play to attack whenever possible but Swansea is using possession play to contain the opposition which is a defensive measure. For example, in the game v Hull City on Dec 9, 2013, Swansea had 67% of play in the middle third with only 1 shot on target in the first half (Telegraph, 2013). Another example is the stats of action zones from whoscore.com, Swansea have 25% in defending third and 26% in attacking third. On the other hand, Barcelona have 22% in defending third and 31% in attacking third. The stats illustrate the different approaches of both teams even they are both using possession play. There are many posts highlighting the problem of Swansea’s possession play football (e.g. Swansea’s set-up this season, A Breakdown Of Swansea’s Away Form In 2012/13, Possession Key To Swansea’s Relative Success, etc).

In conclusion, I don’t think there is a clear line between possession play and direct play. Moreover, there is no contradiction between them. A team can be possession based and play directly to attack the space when the opportunity comes. It is still a positive attitude. On the other hand, if a team keep making long pass directly from the defending third to attacking third with no accuracy when they face pressure, I think it is a negative attitude as they fear to lose the ball in their own third so they just clear the ball (or pass with no accuracy). The passing check list is a good guideline for players no matter which style of play their team use.